While traditional Koenigseggs have always had surprising levels of practicality, creature comforts and features, our primary focus has always been to make the fastest cars on the planet – around a racetrack or anywhere else. The Koenigsegg Regera continues this tradition, but with innovative technology that blends outrageous speed, supreme comfort, and a unique Direct Drive experience.

Regera is Swedish for ‘To Reign’

– a suitable name for a machine that offers an unforeseen combination of power, responsiveness and luxury. The Regera will reign as king of the open road – the fastest accelerating, most powerful production car ever.

In spite of all its advanced technology and creature comforts, the Regera is comparatively light and can still perform competitively around a race circuit. How does 3.2 seconds between 150 to 250 km/h and under 20 seconds from 0 to 400 km/h sound? The only Hypercar/Megacar that we think could possibly be faster around a circuit is another Koenigsegg.

The Regera is to be handcrafted in an edition of just 80 vehicles at Koenigsegg’s production facility in Ängelholm, Sweden. This is the first time ever that Koenigsegg will have two different models in parallel production.

The heart of the matter

The heart and soul of every Koenigsegg is its Internal Combustion Engine – the ICE. The ICE of the Regera follows the path of its siblings, the proven and extremely reliable Koenigsegg dry-sump twin turbo, DOHC, 5.0 liter V8.

The Koenigsegg V8 is the most downsized homologated production ICE in the world, with 220hp per liter (using regular pump gas). The compact nature of the engine means the Regera is light in weight, and therefore nimble and efficient.

The Regera V8 differs slightly from our predecessor Agera engine. As the powertrain already produces a combined 1500hp and with electric propulsion providing instant torque from the Direct Drive system, we did not have to go as extreme on ICE power. Instead, we installed even smaller, faster-spooling turbos on the Regera, further enhancing the car’s drivability and response.

Traditional hybrids represent a compromise when it comes to weight, complexity, cost, packaging and efficiency.

The Koenigsegg Direct Drive transmission (KDD) was invented by Christian von Koenigsegg and developed for the Regera by the Koenigsegg Advanced Engineering team.

During highway travel, for example, the KDD reduces drivetrain losses compared to a traditional transmission or CVT by over 50% as there is no step up or step down gear working in series with the final drive – just direct power sent from the engine to the wheels.

The Regera has three YASA developed electric motors, which supplement the energy from the combustion engine. Aside from providing extreme responsiveness, these electric motors also allow for torque vectoring, regenerative braking and energy conversion. YASA´s axial flux motors are extremely power dense, making them a key-ingredient for the KDD. There is one YASA motor for each rear wheel, providing electric direct drive, and one on the crankshaft that provides torque-fill, electrical generation and starter motor functionality.

Koenigsegg has developed a clutch-slip mechanism that uses the hydraulic coupling to convert torque at medium/high speeds during fast acceleration. This allows the combustion engine to gain revs and power, thereby giving the sensation of a traditional downshift with the associated aural enjoyment, even without the traditional gearbox.

Shift paddles remain on either side of the steering wheel. The left paddle is used to enhance regenerative braking effect in recharging the battery pack. The right paddle is used to activate the hydraulic coupling’s ‘downshift’ operation.

Koenigsegg has worked extremely hard to find the best performing, and safest battery possible for the Regera. This research and testing has resulted in an 800 volt, 4.5kWh battery pack, making the Regera the world’s first 800V production car.

This extreme battery technology will now provide an amazing 525kW of discharge and up to 200kW of recharge. The only batteries in any form of automotive use that provide comparative performance for their size are those found in Formula 1 race cars.

The Koenigsegg Regera battery pack also boasts the highest cooling capacity of any battery in automotive use today. All electric vehicle manufacturers use coolant piped around the battery pack to draw heat from the batteries. There is always an area that traditional cooling pipes cannot reach, however. The Regera battery pack is housed in a sealed unit featuring optimized local coolant flooding across all critical heat-sensitive elements. Every critical surface within and around the battery stack is cooled as efficiently as possible.

Finally, there is the battery pack’s weight. Through research and investment in premium battery technology, the production version of the Regera will ship with a battery pack that not only performs better, but weighs just 75kgs, a saving of 40kgs over the concept battery.

Every cell of the pack is carefully monitored for voltage, state of charge, health and temperature. The cells are enclosed in a carbon fibre casing for efficiency, safety and stability. The battery is located in the most protected area of the car – the carbon-aramid chassis tunnel.

To put the revolutionary nature of the Regera into proper perspective, it has almost triple as many electric horsepower (700hp) than its closest hybrid rival, with over 300hp more in total horsepower. And yet the Regera remains at a very competitive weight, while still including features such as a six way adjustable electrical seat and a fully robotized body work.

A new level of luxury

The Direct Drive transmission of the Regera delivers blistering performance, while at the same time offering one of the smoothest, most soothing driving experiences imaginable. It is a true Jekyll and Hyde experience that depends completely on your mood.

We have developed a completely new rear sub frame that allows the engine and transmission to rest on active soft mounts. When driving in normal conditions, the mounts stay soft and isolate engine noise and vibrations. During spirited driving, the mounts firm up to solidify the car and give greater response. The shock absorbers are active in both height and stiffness, adjusting instantly to your inputs behind the wheel.

The Regera can also be driven in absolute silence, with a full EV mode available for shorter periods of time.

For a detailed insight into the Koenigsegg Regera please view the Inside Koenigsegg series below. All episodes can be accessed by using the button on the top right of the video window.

Read More about the unique features

Daytime Running Lights (DRL) are often the first glimpse one gets of a car approaching from a distance. We wanted the Regera to be easily recognized from afar, a desire that led to our new Constellation DRL system.

The constellation effect was achieved by scattering LEDs around the lamp cluster – like stars set against a night sky of polished carbon fiber.

The LED´s make the whole lamp cluster glitter and shine as if encrusted with diamonds. There’s cool, and then there’s Koenigsegg cool.

The Regera is the first car in the world that operates all body closures completely automatically, at the touch of a button. We call this system ‘Autoskin’.

Koenigsegg has managed to robotize the entire Regera with almost no weight penalty, thanks to the latest advances in compact lightweight hydraulic technology. The Regera features functions such as active front and rear wings, chassis control and lifting system as standard, so the hydraulic pumps and accumulators were already in place to implement automation of our doors and front/rear hoods. The Autoskin hydraulics replace gas struts of similar weight, resulting in minimal weight impact.

All openings and wing mirrors are fitted with proximity sensors to safeguard against the doors striking nearby objects (curb, low roof, etc) while opening or closing.

The Koenigsegg One:1 featured the world’s first top-mounted active rear wing. This was an innovative solution that maximized down force compared to its size and weight.

The Regera has taken this solution to the next level, allowing the wing to fully retract into the body work enhancing the cars elegance while parking and reducing drag while cruising. The wing’s active, foldable mechanism is a lightweight work of carbon fiber art and the movement is truly mesmerizing.

Why do we use a top-mounted rear wing? It is common to see a rear wing supported by pillars running between the body of the car and the underside of the rear wing. This is a good base level solution that provides appropriate downforce when designed in the right way.

Aerodynamic testing shows us, however, that it is the underside of the wing that provides the most downforce, so disturbances to this surface should be minimized where possible. A top-mounted rear wing such as that fitted as standard equipment on the One:1 and Regera provides an undisturbed underside surface for maximum downforce. 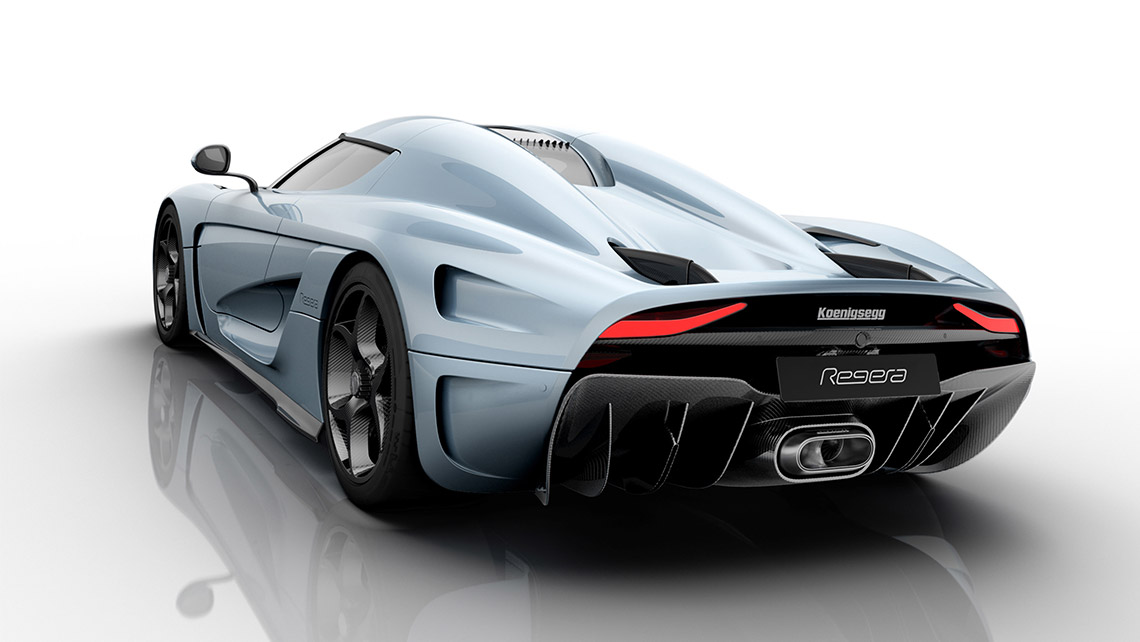 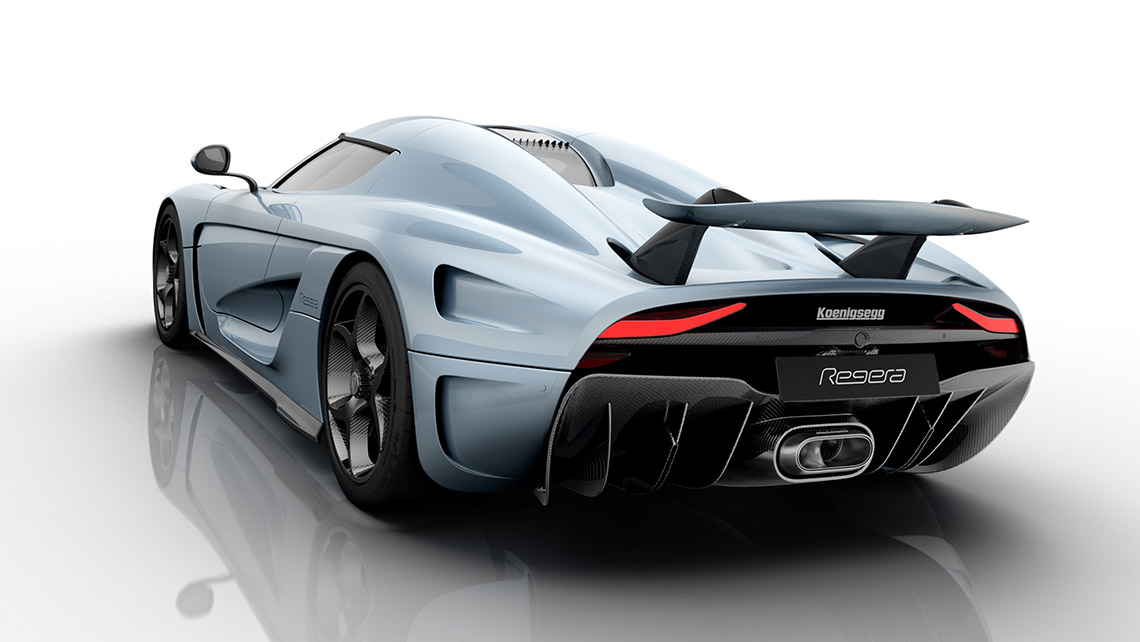 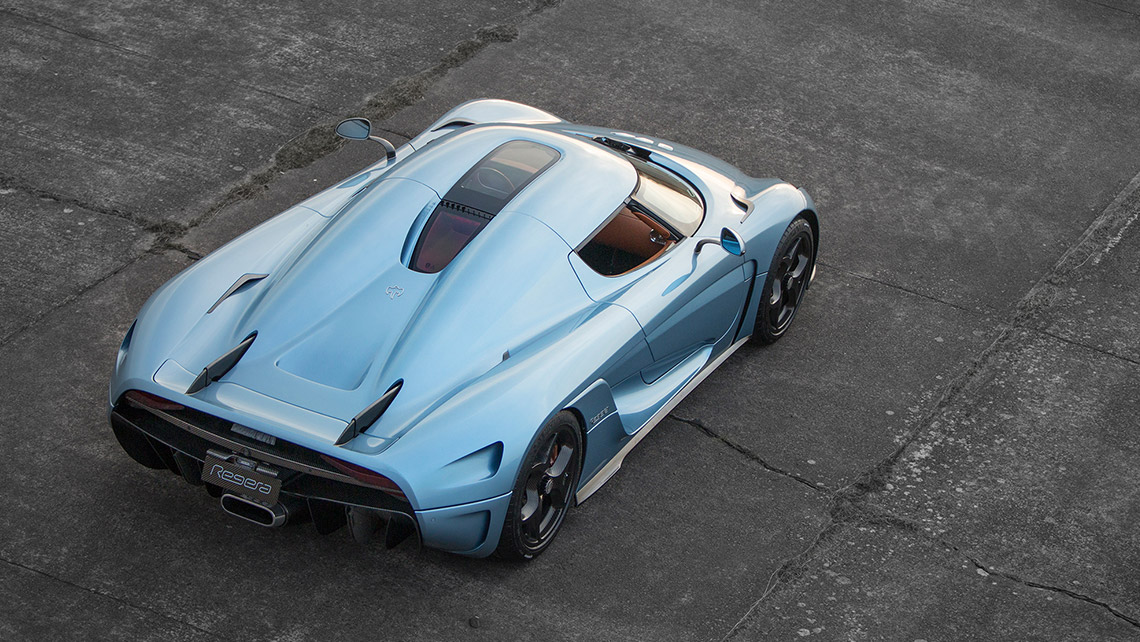 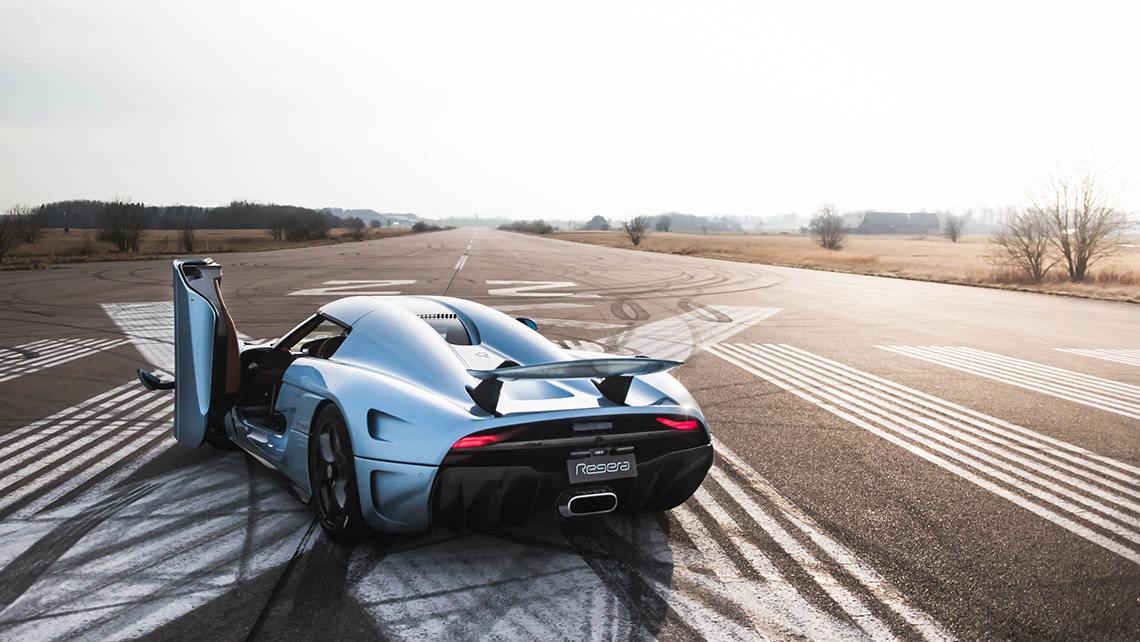 Revisiting the sound of another era

The Regera has a custom designed, tuned titanium exhaust system developed in conjunction with exhaust specialists and partners, Akrapovic. This unique exhaust system includes a fish tail outlet, designed by Christian, a design that has not been seen on production cars for at least half a century – bringing back the sound of performance cars from the past! 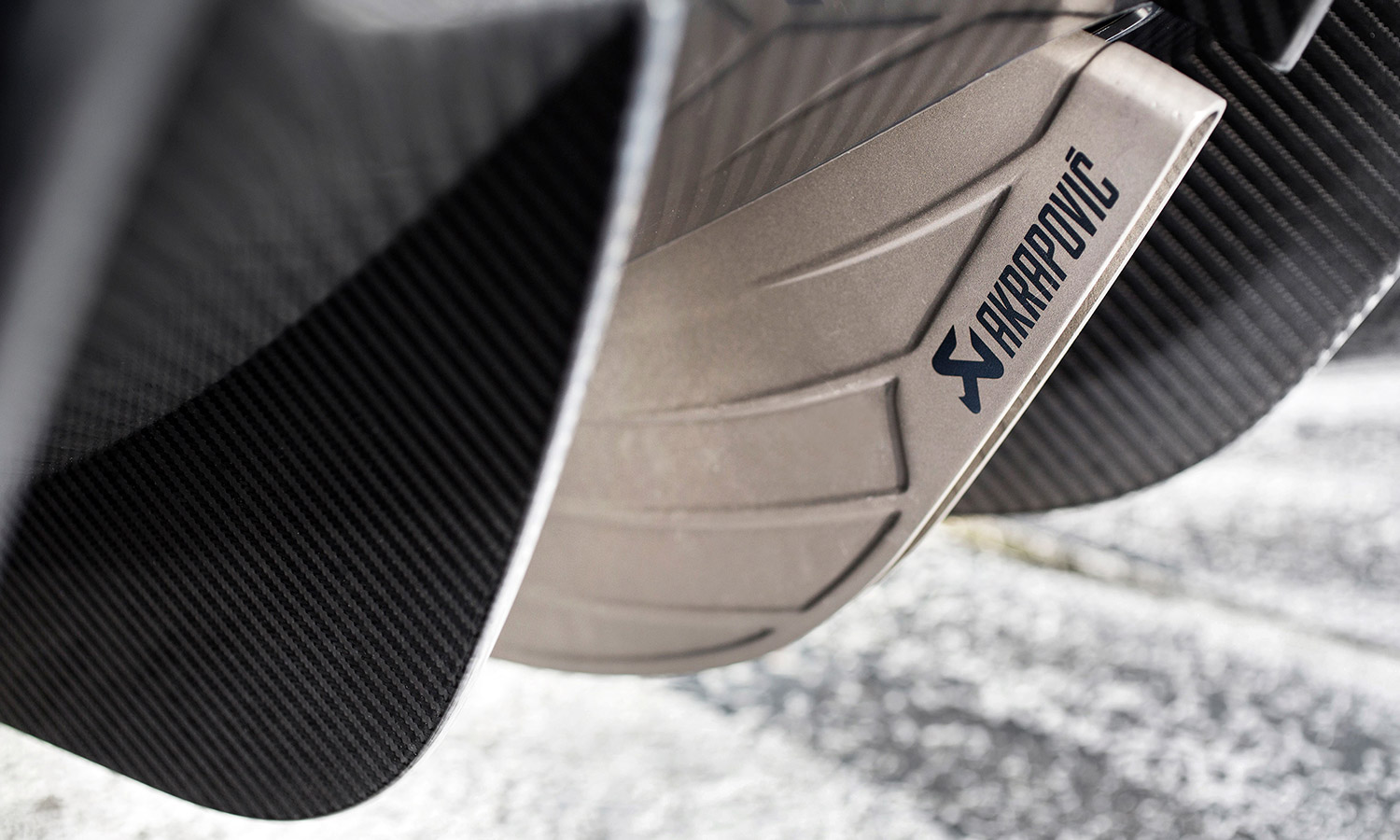