Ultimate performance has belonged to the world of two-seaters with very limited luggage space – until now. The Gemera is the world’s first Mega-GT and Koenigsegg’s first four-seater. Extreme megacar meets spacious interior and ultimate environmental consciousness.

Despite being a four-seater, the Gemera easily outperforms most two-seat megacars, both combustion and electric. Still, the focus of the Gemera is taking on long-range public roads – family trips, in comfort, style and safety with never-before-experienced performance.

The Gemera, if plugged in and filled with Gen 2.0 ethanol or CO2 neutral methanol like Vulcanol or any mix thereof, becomes at least as CO2 neutral as a pure electric car. Before these second-generation renewable fuel sources are more accessible, the Gemera can also be driven on E85 and in worst case normal petrol.

The notion behind Gemera’s name – a combination of the two Swedish words – “ge” (give) and “mera” (more) signifies “to give more”. A suitable name for a car that adds features and functions without taking away anything that makes it a true megacar.

The Gemera seats four large adults comfortably with space catering to their carry-on luggage, meaning the Koenigsegg megacar experience can be shared with family and friends.

The Gemera is one of the safest megacars out there and it is designed for world-wide homologation. The Gemera has a very strong carbon fiber monocoque, six smart airbags, stability control, TC, ABS and ADAS 2.5. It lacks nothing in ultimate safety.

The all-wheel steering and all-wheel drive and all-wheel torque vectoring give the Gemera maximum opportunity to offer a safe, stable and exhilarating drive. ISOFIX is available for both rear seats.

The Koenigsegg Gemera´s engine is small. At the same time, it is big when it comes to power, torque and sound. Still, it is small when it comes to emissions and consumption. In short - it is a contradiction of an engine, developed and created by Koenigsegg and its sister company, Freevalve. Therefore, it has been named the “Tiny Friendly Giant” – or TFG for short. Being a two-liter three-cylinder engine, the TFG is future-proofed given its extreme performance, reduced fuel consumption and lowered emissions – not to forget its ability to run on second-generation CO2 neutral renewable fuels.

The Gemera complements the TFG with three electric motors and the patented single-gear Koenigsegg Direct Drive (KDD) transmission. The total output is a combined 1700 bhp or 1.27 MW of power and 3500 Nm of torque.

The immense torque combined with the relatively low curb weight of 1850 kg means that the Gemera can go from 0 to 100 km/h in only 1.9 seconds and from 0 to 400 km/h in record matching pace. To top things off, it also comes fitted with a lightweight 800V battery which enables the Gemera to go full electric for up to 50 km.

Read More about the engine and transmission

The Freevalve system in the TFG offers the unique ability to have independent control of the intake and exhaust valves. For any engine load criteria, the timing of intake and exhaust can be independently adjusted. The system can then “decide” how to operate the valves depending on driving conditions – which combination to use in order to maximize performance, minimize fuel consumption or regulate emissions. Freevalves allows for a greater degree of control over the engine, which in turn provides significant performance and environmental benefits.

The TFG has an estimated fuel consumption of 15 – 20% less than a typical modern four-cylinder two-liter engine with direct injection and variable camshaft.

The Freevalves improve engine efficiency at part load by eliminating throttle losses since there is no throttle.

Freevalves are also capable of running the so-called Miller cycle, which is why the TFG can have a static compression of 9.5:1, which is high for a high boost turbo engine. Using the Freevalve system to run for example the Miller cycle, gives the TFG high efficiency and high power at the same time. All factors considered, the TFG is one of the most frugal and most powerful production engines in the world for its size.

Traditional combustion engines with camshafts give out most of their pollution during their first 20 or so seconds of cold start, due to cold cylinders, cold catalytic converters and poor fuel mixing at idle.

The TFG overcomes two of the three issues directly at start up, by heating up and provoking turbulence of the fuel mixture back and forth through the intake and exhaust valves. This much-improved cold combustion also leads to much faster catalytic converter heat up, thereby reducing cold-start emission by around 60% compared to an equal-sized traditional engine with camshafts.

When running the TFG on renewable alcohol fuels – there are virtually no particulates produced and in many “normal” environments the TFG consumes and burns more particles from the surrounding air than it produces, thereby actually cleaning the air.

Using the best alternatives of alcohols there is even the chance for net-zero or CO2 negative emissions.

The TFG is extremely compact compared to its power and torque capabilities. One would typically associate a 600 bhp power output and 600 Nm of torque with a twin turbo V8 engine. The dry-sump system helps to shrink the engine further while allowing for perfect oil control during extreme driving. The complete long block does not weigh more than 70 kg and fits in a typical carry-on luggage case.

The TFG´s Freevalve system allows full control of the combustion cycle. No other variable valve actuation system offers this level of control and reliability.

Both the intake and exhaust valves can be opened and closed at any desired crankshaft angle and to any desired lift height. This flexibility enables the TFG to deliver low fuel consumption and emission numbers, while still delivering massive torque and power.

The result is a three-cylinder two-liter engine that gives 400 Nm of torque from 1700 rpm and max torque of 600 Nm. These never-before-achieved numbers in an engine of this size make the TFG the most powerful engine per cylinder and volume to date, putting it light years ahead of any other production three-cylinder engine today.

There are many variables at play in the workings of an internal combustion engine (ICE). These include the complexity of achieving maximum performance, efficiency, reliability and safety with minimum fuel consumption, emission, size and cost.

Adding the Freevalve system to the mix makes it possible for the ICE to reach new heights. The Freevalve system creates many more variables to consider and tune. These can include NOx, CO2 emissions, fuel consumption, HC/NMOG, power and torque, all competing for priority in a cycle.

Clearly it becomes virtually impossible for humans to tune each parameter for optimum results. Given this, Koenigsegg has decided to use AI in order to optimize the TFG for different conditions and situations

That is why Koenigsegg has chosen to partner with SparkCognition, the world’s leading AI company, in order to leverage the development of the Freevalve equipped TFG.

Fitted with a custom titanium Akrapovič exhaust, the TFG’s 2-liter three-cylinder engine gives lag-free response and comes with an evocative and deep-throated growl. The TFG may be a small engine but it has a big and “thumpy” sound thanks to its large bore and stroke, combined with the “open” sound of Freevalves. The result is a deep, throaty, responsive and alluring sounding engine. The sound can also be smooth as the exhaust notes can be tuned and balanced by the Freevalve system.

Traditional hybrids represent a compromise when it comes to weight, complexity, cost and packaging. The Gemera, on the other hand, together with its sibling the Regera, is a new breed of hybrid. Its main advantage? Providing ultimate response from standstill to top speed in the form of a single gear direct drive at lower weight and higher efficiency than what any other hybrid solution can offer.

During highway travel, for instance, the KDD reduces drivetrain losses compared to traditional transmissions or CVT by 3-5% as there is no step-up or step-down gear working in series with the final drive – just direct power from the engine to the wheels with the torque-converting HydraCoup locked up.

Torque is crucial, especially when accelerating to extreme speeds in one gear. In the Gemera, this is facilitated by the torque-converting HydraCoup – it converts the combined 1100 Nm coming from the TFG and front e-motor to almost double its torque up to 3000 rpm. That is why the Gemera has 3500 Nm of torque from standstill and why it can accelerate from 0-400 km/h in a single gear.

The separate rear e-motors enable torque vectoring and reverse. The front axle has an open differential with a wet clutch pack for each output shaft, also enabling torque vectoring. This means that the Gemera has all-wheel drive, all-wheel torque vectoring, and all-wheel steering, as it also has independent rear-wheel steering – offering maximum traction and safety, and one exciting driving experience. The Gemera also comes with active ride height to complement driving conditions.

Additionally, the all-wheel torque of over 11000 Nm is clawed into the ground from standstill, creating quite the undertaking for the Gemera’s massive and grippy Michelin Pilot Sport 4S tires.

Taking cues from the Regera, the Gemera’s 800V, 15 kWh battery will provide an amazing 900 kW of discharge and up to 200 kW of recharge. Every cell is carefully monitored for voltage, state of charge, health and temperature; and the cells are enclosed in a carbon fiber casing for efficiency, safety and stability. The battery is placed in the most protected area of the car – under the front seat and in the carbon-aramid chassis tunnel.

The Gemera can travel up to 50 km in EV only mode and up to an additional 950 km highway cruise speed in hybrid mode, before needing a fill-up – totaling a 1000 km range. This makes the Gemera a true continent crossing family-oriented “Autobahn” rocketship.

The Gemera combines the exciting performance traits of a mid-engine two-seater megacar with the practicalities of a four-seater car with more luggage space – meaning the Koenigsegg megacar experience can now be shared with family and friends. As a Mega-GT and Koenigsegg’s first four-seater, the Gemera signifies a revolutionary new vehicle category with an innovative automotive design to match.

Thanks to the lack of B-pillars, the Gemera’s cabin is essentially unobstructed for both front and rear passengers to enter or exit, with no need to move the front seats to get in and out of the rear

Read More about the Design Features

Eight cup holders - two per person - one hot and one cold 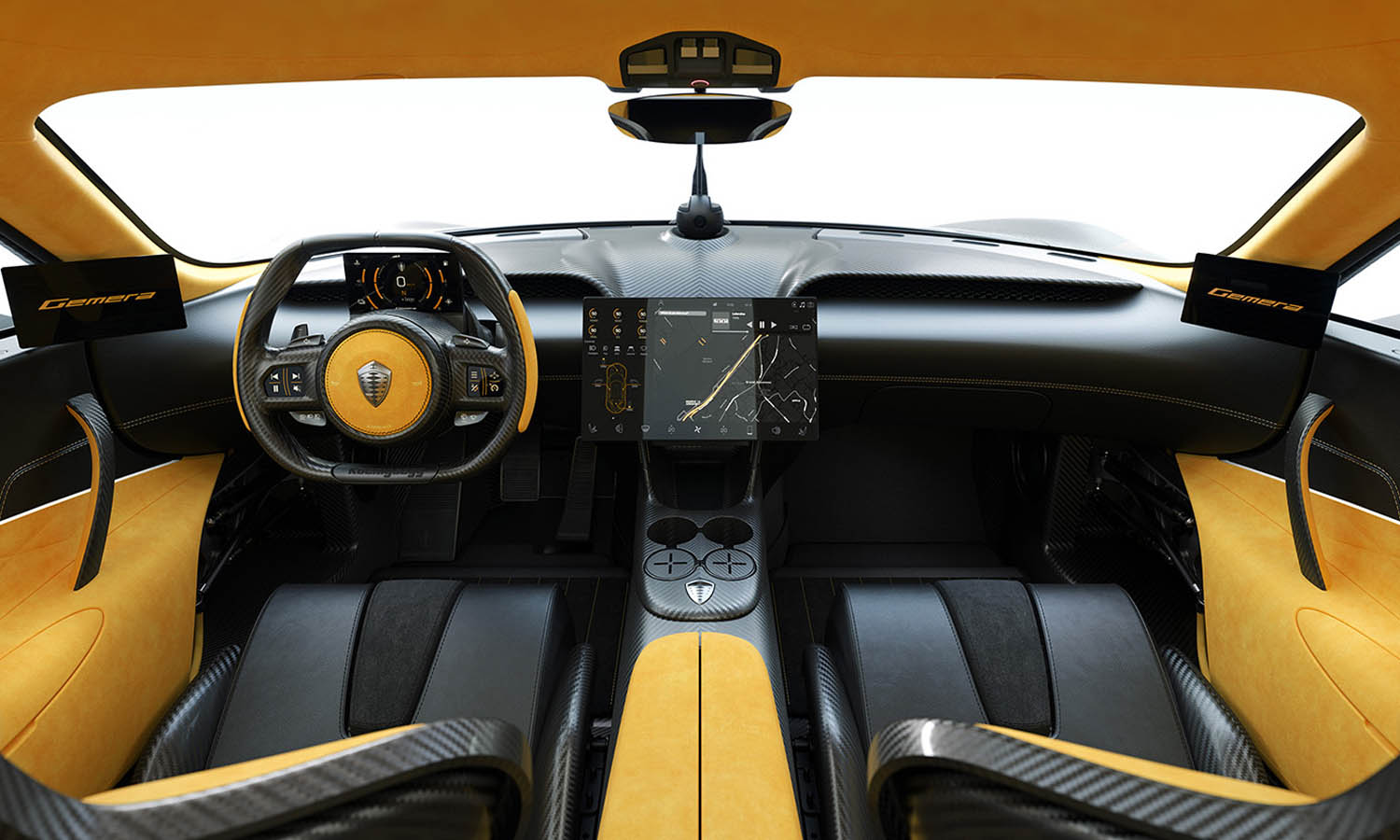 Rear view cameras replace the side mirrors for better aerodynamics

Air vents incorporated into the headlights and the taillights 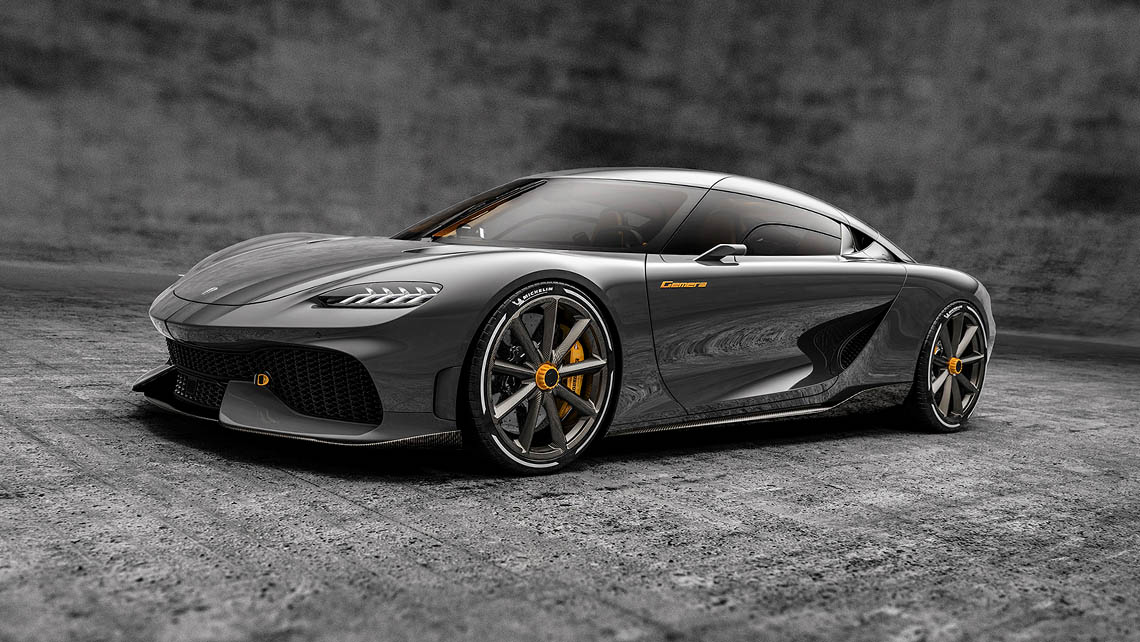 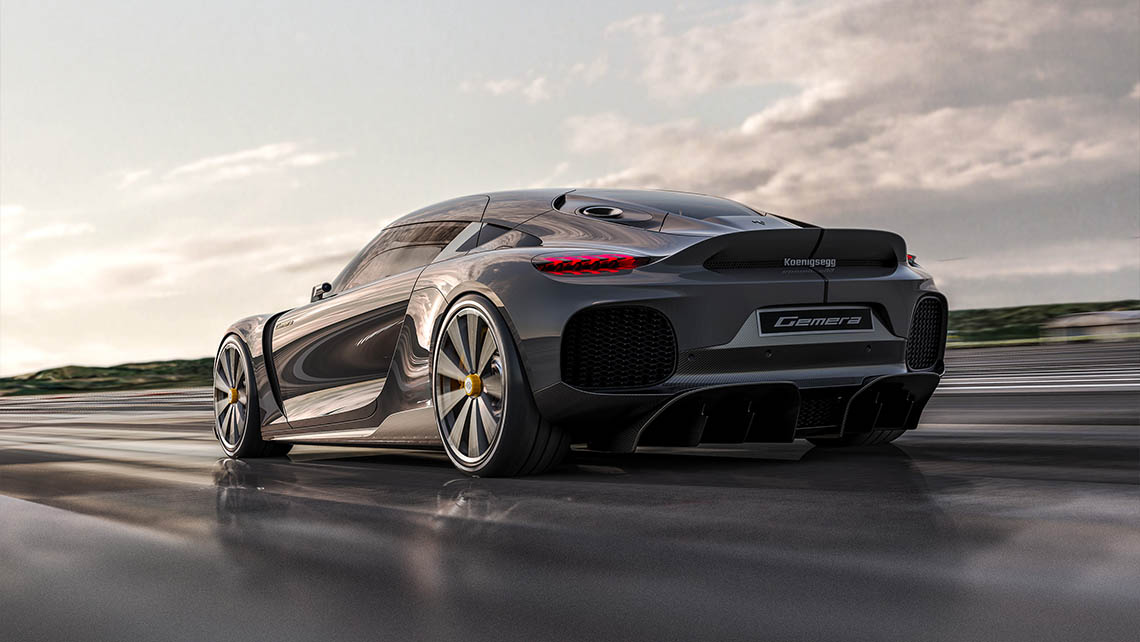 The most amazing sound from a 3-cylinder engine ever

The Gemera has a custom designed, tuned titanium exhaust system developed in conjunction with exhaust specialists and partners, Akrapovic. It leaves a massive impression on looks and sound. 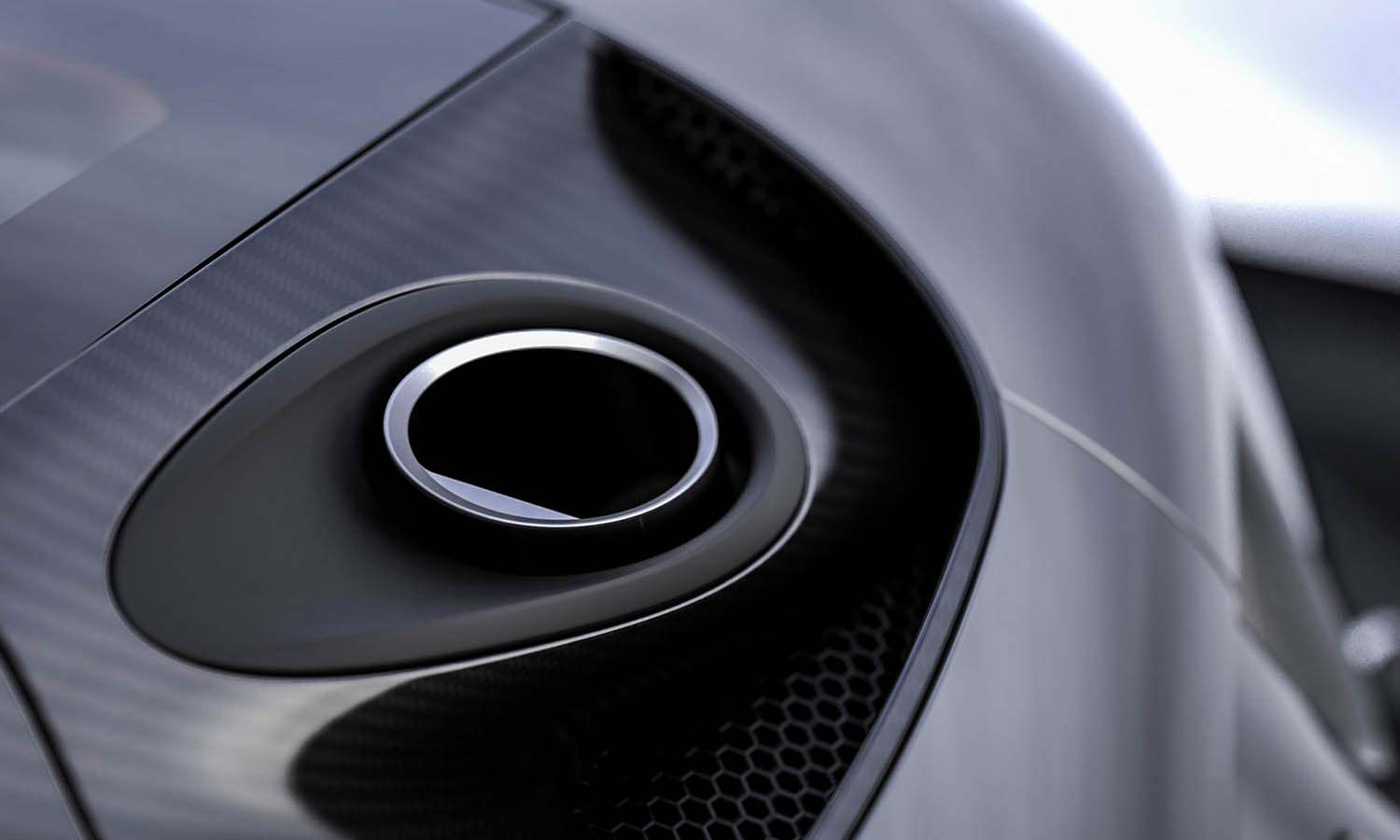